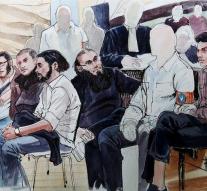 brussels - Belgian jihadist Fouad Belkacem was married a few weeks ago in the prison of Hasselt. Belkacem would like to avoid being delivered to Morocco.

Belkacem married a Belgian woman of Moroccan origin. As a result, Belgian nationality could not be reduced.

When Belkacem was still in Antwerp in Antwerp, he did not succeed in marrying because the former civilian ships of his time refused him.

Belkacem is the founder of Sharia4Belgium.