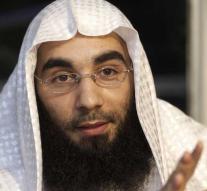 antwerp - The convicted leader of the terrorist group Sharia4Belgium, Fouad Belkacem, loses his Belgian nationality. The court in Antwerp has determined that.

The Belgian judiciary started the procedure in 2016 to take the founder of the now dismantled organization his nationality because he would pose a danger to public security. He would have seriously failed to fulfill his obligations as a Belgian citizen.

The 36-year-old Belkacem only retains Moroccan nationality. Two years ago, he was sentenced to twelve years in prison for leading a terrorist organization that, among other things, recruited young people for the war in Syria. He was also convicted in other cases and would have to sit until 2027.

The man married in Hasselt last year to prevent him from being extradited to Morocco. He married a Belgian woman of Moroccan origin.