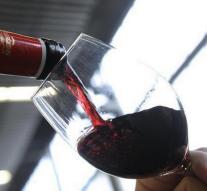 flashers - A bottle of wine making three Belgians unwell last weekend contained large amounts of MDMA, better known as the partydrug xtc. They bought the bottle in a shop of the Belgian Ministry of Finance in the Walloon city of Gembloers.

Two out of three suffered from cramps and the third was even brought into an artificial coma. An analysis showed that the wine MDMA and the highly toxic product contained methanol. 'The quantities are not yet known, but it's an explosive cocktail for the human body,' the Public Prosecutor said, investigating further and warning other wine buyers.

In the so-called Fin Shop, seized items and unposted mail packages are sold. The bottle of Italian white wine was in such a package and was possibly part of a larger party of drug dealers. The Ministry of Finance decided on a temporary basis to stop selling alcohol in its stores on Tuesday.