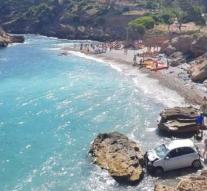 palma de mallorca - A Belgian couple was driven off a cliff during their vacation on the Spanish island of Mallorca with their rental car. The Nissan Micra came ten meters lower to a halt against a rock in the sea. The occupants were injured.

The couple had parked the rental car in a parking lot on top of a cliff near the beach at S'illot. When the car parked backwards, the car was still in its way, causing the car to exit through a wooden fence and from the ten-meter high cliff. This is how Nieuwsblad reports.

The car came to a standstill against a rock in the water. The couple had to be released from their plight by the fire service. The 58-year-old man and the 53-year-old woman were transferred to the hospital after the accident.