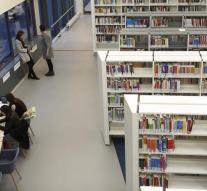 halle - Employees of the library in Flemish Halle think about who has littered with books. Cameras have recorded that someone left a big message in a carnival shop, also in Halle. The minor is a well-known in the library, writes the Belgian newspaper Het Nieuwsblad monday.

A cleaner found a book about birds in the library's library, painted with poke a month ago. In the weeks after that, the boy who received the name of 'bookkeeper' from Belgian media again reappeared.

The carnival shop has given the images to the police. Agents went to the library, where the popper appeared to appear on a daily basis.

The Public Prosecutor's Office is careful. 'We are not yet sure whether the two perpetrators are the same or that we are dealing with a copycat,' says a spokesman for the newspaper. Nobody has been arrested yet.