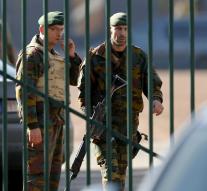 brussels - The Belgian army will be downsized by 2030 from 32 000 to 25 000 troops. At the same time however for 9.2 billion euros in the armed forces. This is stated in the Strategic Plan for Defence Minister Steven Vandeput Tuesday it is approved.

A choice for the successor to the F-16 is still not in the plan, it will be invested 34 fighter jets. According to the minister, the Belgian army remain active on land, at sea and in the air, but will have to proceed with fewer troops. That number is now 32 000, in 2007, the Belgian armed forces have 42 000 troops.

According Vandeput is 'aligned' where the Belgian army in the future will make the difference. There is thereby a shift to support operations and conflict prevention , it sounded.

Except for replacement of the F-16's money is invested in the purchase of two frigates and six minesweepers. There are also six drones.