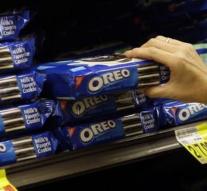 The topman from Fretmaker McCain Foods, trained in Antwerp and Ghent, replaces Irene Rosenfeld at the end of November with the group with $ 66.2 billion market value and last year $ 25.8 billion revenue. He is in charge of 90,000 employees and previously worked in the same sector at Danone.

That transition in the summit reported the company on Wednesday. Van der Put immediately becomes CEO of the company, besides the Oreo biscuits, LU jaws, Cadbury and Milka chocolate and the famous Toblerone ropes.