Home / World / Belg is looking for this laughing couple 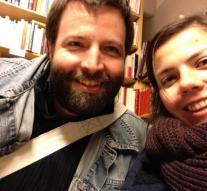 - The Belgian Stef left his phone unattended and soon found out that someone had taken his smartphone and had a self-esteem. Stef could appreciate the joke, which was also a warning for him to monitor his phone. Now, four years later, he seeks the happy set of the picture.

'Someone who can identify these people?', Stef asks in a public Facebook post, where he also places the conscious photo. 'They ever pulled this selfie with my mobile phone in Profit Boekske, where I was a book salesman and left my mobile unattended. '

Stef finds the man with the beard and the woman with the red scarf, who both look kindly in the camera, look 'sympathetic'. 'Sorry I did not get to know them. '

The Belgian hopes that many people read his message so that he can figure out who made that conscious day secretly making a selfie with his phone. 'What they did makes me extra curious, now after four years... '