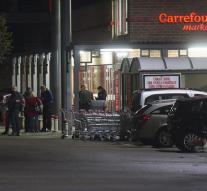 - The man who hosted about twenty people in October in a supermarket in Brussels municipality Vorst was sentenced by the court to nine years of imprisonment on Wednesday. The Public Prosecutor had demanded seven years.

The 25-year-old Noureddine Ouartassi, son of a sportsholder in Vorst, had asked the police station for his return to prison shortly before his death. He was unconditional released. The police, however, saw no reason to arrest him.

A little later he went to the hostage and threatened with a slaughter party. After an hour he handed over to the police. There was no injury. The man threatened the attendants with a gun and pulled one of the boxers.

Ouartassi was previously convicted of thefts with violence and threats.