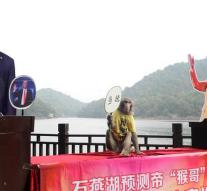 - Now Donald Trump is surprisingly elected as the new president of America, to China expecting to get someone who hits the table with his fist, but with whom good is to negotiate.

Harsh words from Donald Trump, earlier this year. China was undervaluing its currency deliberately to make exports cheap, and the new man in the White House immediately proposed 45 percent tariff on imports from the Far East in anticipation.

Or Trump is going to do is actually the question because that decision could trigger a trade war that is counterproductive for the US In China, they take his words also with a grain of salt.

,. Trump is a clown. Funny, but also unconscionable, 'Wang Yiwei, a specialist of international relations at Renmin University in state newspaper Global Times.

Conclude that the Chinese also some other statements already made Trump. He called the rulers in the east to invade in September North Korea to resolve the problems there for the US. '

' He has a big mouth, is not exactly traditional, huge and frank ', Chinese state newspaper described him earlier. ' In short, the perfect populist who the audience easily provoked out of his tent. Americans really realize that all these promises will not really change their lives, so why not support the new guy Trump? '\n  \n  \n   advertisement

Despite his sometimes foul-mouthed language and brutal attitude is the new president is not bad in China. In a poll which was previously held by China Daily, gave 60 percent of Chinese respondents to support Trump in the election campaign, where only 8 percent said Hillary Clinton.

Other polls showed a more nuanced picture, but it does indicate that the Chinese are not so negative towards the Republican. ' Trump is a mystery to us, 'said Jia Qingguo, attached to Beijing University. ' Although he is critical of the policy with China, he also looks to strengthen the relationship. '

The presidential election in the US in China widely reported in the press. But mainly to demonstrate that democratic elections is not necessarily a commendable process.

' More and more Americans are ashamed of this kind of democracy, 'says columnist Shen Dinglim. ' The rough way of campaign run by many residents of our country made quite an impression, 'Jia Qingguo adds. ' Many people are now convinced that politics is quite chaotic in a democracy. 'This is in contrast to China, where the Communist Party states, but of course everything goes very orderly.