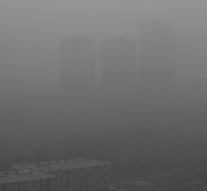 Officials from the city issued a warning Friday to serious air pollution, and advised children and the elderly to stay indoors.

Earlier this month, Beijing had severely affected by smog. Twice this month, the authorities in China announced the highest state of alert on the large amount of smog in Beijing. The alert means that, among other schools must remain closed and that construction work in the open air should not be exported.

Meteorologists predicted that the smog would come back again.