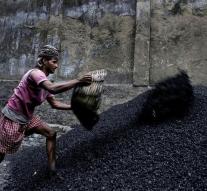 - Beijing continues to decommissioning of its coal mines. There remain three more. By 2020 should be the last close. That's Xinhua news agency published Wednesday, relying on information from the urban commission for development and reform. Investing heavily in alternative employment.

Beijing this year, the production shut down in two companies, according to committee member Li Bin together accounted for 1.8 million tons of coal. In a few years this polluting fuel for the power history. That history goes way back. Already during the Yuan Dynasty (1271-1368) were mined in the coal region.

The quality in the mountainous area west of Beijing was high. Since the founding the People's Republic in 1949 coal was an almost indispensable energy source for the capital. As an end in the short term. In 2010, Beijing still had need 26 million tons, that amount was more than halved last year.