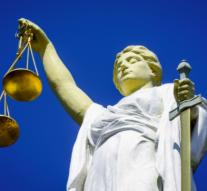 antwerp - In a lawsuit against six Foreign rebel fighters in the Syrian Civil War that began Wednesday in Antwerp, the prosecutor showed a video of the beheading of a man in Syria, where five of the suspects were involved. The sixth suspect accused in early 2013 to have executed a captured Shiite with a bullet through the head.

Belgian Public Prosecutor demands thirty years' imprisonment plus fifteen years TBS against all six. It is the first time that the federal prosecutor performs a lawsuit against Foreign rebel fighters in the Syrian Civil War because of terrorist acts in Syria. Five of them were not present. They are still in Syria or killed there.

The sixth suspect, 24-year-old former member Sharia4Belgium E. Hakim, returned in 2014 to Belgium after he sustained in a grenade attack brain damage and was arrested.