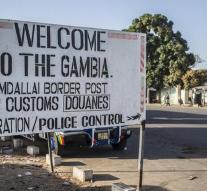 banjul - Troops from West African countries have invaded Thursday Gambia. 'We have entered Gambia,' reported a spokesman for the Senegalese army.

Previously also reported to interfere Nigeria. Neighbours Thursday sworn president Adama Barrow to help in the saddle, because the long-serving leader Yahya Jammeh refused to resign after an election defeat.

The Nigerian army announced Thursday that actually sent troops to Gambia. They must protect the Gambian population and ensuring safety. Soldiers go according to a statement form part of a coalition of West African countries.