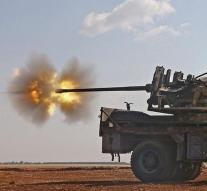 - Syrian rebels, backed by Turkey, on Saturday the attack on Dabiq. The town in northwestern Syria, near the Turkish border, is a major stronghold of IS. According to the Syrian Observatory for Human Rights, the rebels now occupied the villages Irshaf and Ghaitun.

With the support of Turkish tanks and warplanes, the rebels had already moved up in recent days toward Dabiq where IS more than a thousand soldiers committed violent resistance. Dabiq is an important city for IS, as an apocalyptic prophecy states that there occurs the final battle between Muslims and infidels. The propaganda sheet IS therefore called Dabiq.