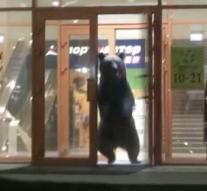 - A large brown bear is Wednesday night in the eastern Russian city Gabarovsk to the dismay of the public and staff entered a shopping center in the city. The animal was trapped and gradually began to run in panic to and fro, bystanders ignoring.

Eventually he managed to push open a locked glass door and the parking lot for the center to run on.

The bear then entrenched himself in a fenced park, where an agent admitted shooting the animal was finishing through a gate with a few shots. To our knowledge no bystander was injured.