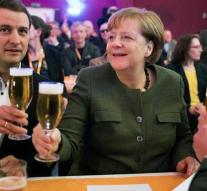 demmin - Packed Bavarian beer halls, heavy stuff and of course trees with bretzels on wooden tables. In addition, a crowd of cheerfully drunken Germans, fat men in Lederhose, blond women in Dirndl, plus a political leader who publicly ridicules the competition. For example, an average Ash Wednesday runs with our eastern neighbors.

But times have changed since the turbulence in Berlin. Angela Merkel (CDU) knows that her chair legs are sawn, her SPD colleague Martin Schulz has already been sent in, and the Bavarian Prime Minister Horst Seehofer (CSU) also lost his position.

And that's how Merkel was working hard on Wednesday night in East German Demmin, in the middle of its sparsely populated constituency. In a bare tennis hall she wore a forest green blazer and her favorite Deutschland necklace, in the familiar black-red-gold colors. Mr Merkel did not make jokes; she knows how cautiously she now has to deal with party members, coalition partners and even political opponents.

The pastor's daughter preached that people 'should not walk through the wall, but use their minds and above all listen and respect others.' Maybe a hint to our hysterical media company and Donald Trump.

Nearly a thousand kilometers away, near the South German three-country point Passau, the upcoming Bavarian Prime Minister Markus Söder (CSU) boomed in a hall with six thousand beer-drinking, blue-white flags waving and singing Lederhose fans. According to him, it was a 'big mistake' to award the nationalist Alternative für Deutschland the right wing of the conservatives.

The Söder, dressed in a brown Janker jacket with a moss green tie, compared Merkel with a 'sleepwalker' and ended with an unconcealed threat. 'We have to regain control over the Stammtisch!' He exclaimed with prolonged applause.