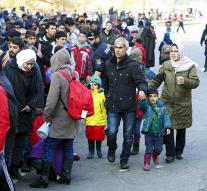 - The German police have enough staff to monitor the German-Austrian border adequately. The staff are so busy with the refugee crisis that there is insufficient control of organized crime. Also, the threat of international terrorism 'immense'.

So says the interior minister of the German state of Bavaria, Joachim Herrmann (CSU), in Welt am Sonntag. He would prefer that the State is responsible for guarding the border. But the government has turned down the offer. Herrmann says, no term for having given the security risks. We even five weeks after the attacks in Paris, and despite the great danger introduced no reliable controls, is an admission of failure.

If the power Herrmann is the influx of refugees halted. There still come to 4000 asylum seekers per day via the border with Bavaria. That number should not downplay. We must ensure that the influx of refugees to an average of 1000 per day is reduced. Herrmann wants to see in 2016 coming in at most 350 000 foreigners, and not again more than a million, like this year's event.