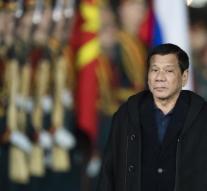 marawi - In fighting in the south of the Philippines between government troops and Islamic rebels, over five hundred people have been killed in the last seven weeks. Among the victims are 39 civilians and 90 soldiers and police officers, the army said Tuesday. At least 381 Islamists came to life.

President Rodrigo Duterte declared the state of siege for the Mindanao region on 23 May, after which at least one hundred Islamist rebels attacked the city of Marawi. The scheme will expire in 10 days.

Minister of Defense Delfin Lorenzana also reported media reports that up to 2000 civilians were killed.