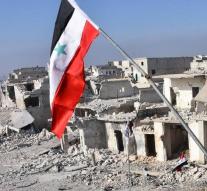 - The battle for Aleppo is practically over, according to the oft-quoted observers who call themselves the Syrian Observatory for Human Rights (SOHR). The leader of the Sohr, Rami Abdurahman, said the remaining rebels retreat terminated from their last strongholds and fight.

The Syrian military reported Monday that they have recaptured almost the whole city. However, rebels fired a missile at a residential area. In addition, according to the state news agency SANA Monday at least eight deaths and nearly fifty wounded.

Since October recapture his government forces with Russian air support busy town on jihadists and rebels since the second half of 2012 were entrenched. The Syrian General Zaid al-Saleh said Monday that the battle is almost over. Rebels who have yet to surrender, according to him very little time to do it. Those who do not surrender, is slain, warned the General.