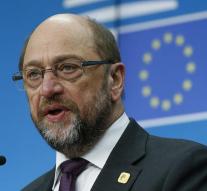 brussels/strasbourg - The battle for the succession of the German Social Democrat Martin Schulz could erupt as President of the European Parliament. The political groups in parliament have almost all moved forward a candidate.

For the largest group, the center right EPP is that the Italian Antonio Tajani. His compatriot Gianni Pittella is the candidate for the Social Democrats. They had previously agreed to give the post to a EVP'er, but they withdrew that commitment.

The liberal group ALDE, where the VVD and D66 belong, see the former Belgian prime minister Guy Verhofstadt as an 'excellent' candidate. The Liberal government, including Mark Rutte, spoke Thursday their support for this 'bridge-builder', given his 'extensive experience. '

The Belgian also Helga Stevens is a candidate for the Conservative group ECR and the Italian Eleonora Forenza for the left group GUE / NGL. The Green Group has nominated British Lambert.

The decision falls on January 17 during a secret ballot in Strasbourg.