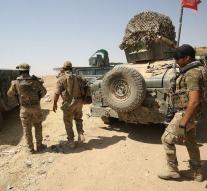 baghdad - Iraqi soldiers and Shiite fighters are trying to recapture a small place outside former IS building Tal Afar. It has been estimated that hundreds of hard-hardened IS fighters are imprisoned. It is the last place in the city where the jihadists still stand, say high soldiers.

An Iraqi army spokesman said that in the meantime fights in the streets of al-Ayadiya. There would be small groups of IS warriors 'in every house and building. 'IS left government forces at a distance with snipers, booby raids and suicide bombings with explosives.

The Iraqi forces launched this attack on Tal Afar earlier this month, where 200,000 people were living in the conflict. The city is on the strategically important highway between Mosul and Syria. It was, with Raqqa, one of the few cities that were still in IS hands.

The authorities say the victory in Tal Afar can not be called until the battle for al-Ayadiya has been completed. There would be the most hardened IS fighters fled from the city. 'They have nothing to lose. They will fight themselves, 'a spokesman predicted earlier this week.