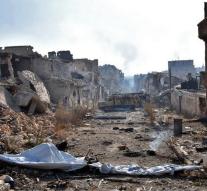 aleppo - The offensive of the Syrian army in the northern city of Aleppo, the main rebel stronghold, has so far more than five hundred civilians killed. Until that figure is the Syrian Observatory for Human Rights.

According to the organization, which tries to follow the civil remotely through a network of observers in Syria itself, was about three-quarters of the victims by air strikes and artillery of the army. The rebels were responsible for about a quarter of civilian deaths. Among the dead who fell at the hands of both camps, according to the figures where the Observatory Thursday it was 81 children.