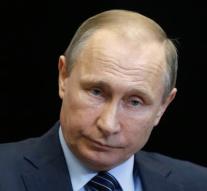 - The talks on Syria Wednesday in Berlin have produced no major breakthrough. You may be extended truce in Syria Thursday. Russian President Vladimir Putin said after negotiations with his colleagues Angela Merkel and François Hollande.

German Chancellor Merkel stressed that in the long-term meeting harsh words have fallen toward Putin. 'The bombing in Syria are inhumane and cruel. Russia is also responsible for there, 'Merkel said. She does not believe that Russian troops terrorists can distinguish 'friendly people', arguing that Putin used for air strikes in Aleppo.

French President Hollande blindly followed: 'What is happening in Aleppo are war crimes. 'He proposed a long-term truce. 'The population can not continue to live in these intolerable conditions. Several hours rest is nothing. '

The Syrian army holds Thursday from 8. 00 am to 19. 00 pm a 'humanitarian pause', a cease-fire air strikes to allow humanitarian aid. Germany and France argued the pressure to extend that into a long-term truce.

'I proposed to accelerate the drafting of a new constitution for Syria to allow for future elections,' Putin said. The Russian leader is not opposed extending the 'humanitarian pause'. He said that Russia is ready to extend the interval of air strikes in Aleppo.