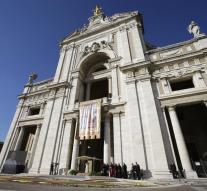 - The Basilica of St. Francis in Assisi has not harmed by the earthquake in Italy. That, Father Enzo Fortunato of the monastery at the basilica told the Italian news agency ANSA. St. Francis (1181-1226) is buried. The current pope took his name.

The basilica in Assisi was heavily damaged in September 1997 by two earthquakes in quick succession. The restoration took two years.