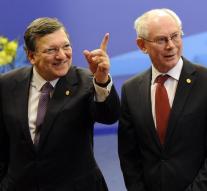 Barroso arrived this summer discredited because Goldman Sachs is considered the cause of the financial crisis. Moreover, his relationship with the bank already seemed intimately during his term in Brussels. Kroes is being investigated for having concealed when she became commissioner a management position in the Bahamas. The Committee's opinion is not binding.

Meanwhile Brussels rocked by another scandal, this time in the current commission. The German member Günther Oettinger was filmed at a meeting which he called Chinese 'gooks' and making offensive remarks about their hairstyles. He refuses to apologize.

Last week, Oettinger pulled himself all the rage on the neck of the (socialist) Walloon Prime Minister Paul Magnette. 'Wallonia is a micro-region which is controlled by communists blocking the EU,' Oettinger sneered at a gala dinner for German employers. At that time ran the planned signing of the EU's free trade agreement with Canada, CETA, danger because Magnette suddenly asked all sorts of additional requirements.

A spokesman for the commission said Monday hinted that no disciplinary action be considered against the German. 'We have no FBI,' he said.