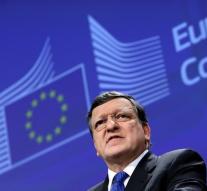 brussels - Barroso maintained all when he was president of the European Commission was warm, secret contacts with Goldman Sachs. This is evident from correspondence between Barroso and Goldman boss Lloyd Blankfein has won the Portuguese newspaper Publico.

A Commission spokesman said Monday ' have nothing to add \'to capture the revelations and noted that their contacts with third parties at the time, EU commissioners were not required. That is now the case.

The Portuguese former prime minister is under fire since this summer he accepted a job at the US bank. In email exchange from 2013 thanks Blankfein Barroso for their productive discussions ' \'and ' exceptionally fruitful meetings\'. According Publico suggested Goldman ' on a confidential basis \'changes in EU policies for which Barroso's cabinet ' with great interest\' to him took.

His successor in Brussels, Jean-Claude Juncker, only admitted after a public fuss, the Commission's ethics committee commissioned to conduct an inquiry into the appointment. Barroso may forfeit his right to a pension.

According to Juncker, Barroso has kept the 'cooling-off' of eighteen months old commissioners must hold before they accept a job elsewhere. But it is the choice of Goldman Sachs that raises questions.

Moreover, the bank is not only partly responsible for the outbreak of the financial crisis in 2007 but helped the Greek government with stashing debt figures. Greece is now being helped in the leg with EU aid billion.