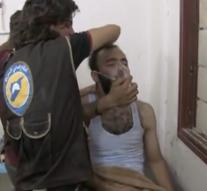 - Syrian aid workers say is used in an attack on a gas field controlled by rebels. Certainly 33 people were overcome by attacking the place Saraqeb. The site of the incident near the site in northern Syria where Monday a Russian combat helicopter was downed.

According to aid workers were from a helicopter barrels of gas dropped over the place. The group, as a neutral,, '' defines, spread over the internet a video which shows how a man gasps for breath and get oxygen through a mask. The rescuers could not determine with certainty what was there in the barrels for gas, but they think it was chlorine.

The warring parties in Syria have repeatedly accused each other in the past of using poison gas.

The site of the incident near the site where Monday a Russian combat helicopter was downed.