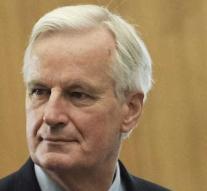 brussels - An agreement between the EU and the United Kingdom on the brexit is within reach. That said EU chief negotiator Michel Barnier at a meeting of the European Chambers of Commerce in Brussels. Next week on Wednesday, EU leaders without Prime Minister Theresa May decide whether there is sufficient reason to approve an agreement.

According to Barnier, 'day and night' is being worked on to be able to disassociate orderly on March 30, 2019. 'We will also try to close the fairest possible deal for the future. 'The Frenchman said that the brexit has no' added value 'and only knows losers.

If the 27 EU leaders were positive about the Brexit negotiations on 17 October, EU President Donald Tusk called all 28 government leaders to Brussels in mid-November to mark the agreement at the highest level.