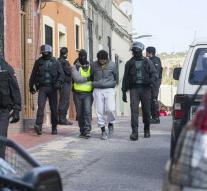 amsterdam - There is a lot of speculation about possible motives of the perpetrators in Barcelona. Currently all options are open. What we know: There are great concerns about support for jihadism.

Terrorism expert Carola Garcia Calvo of Instituto Elcano called the city in September 2016 'the greatest focus of jihadist activity of our country'. She wrote to a report on the size of Islamic state in Spain. It states that thirty percent (!) Of IS sympathizers who were arrested in Spain between June 2013 and May 2016 were living in Barcelona.

For example, an IS cell was rolled up in 2015, of which two members stayed in Barcelona. The men had set up an online propaganda channel that approved terrorist actions. That was reported to the Spanish government at the time. Also in September 2016 two jihadists were arrested in Barcelona.

Last year, El Periodico WhatsApp talks came out between the Spanish news site between a young girl in Catalonia and a Spanish jihadist in Syria. The two then spoke about a possible 'big' attack.

The jihadist links are not completely new. As early as 1995, someone was arrested for ties with the Algerian jihadist organization Groupe Islamic Army. That group shook close to al Qaeda at the time.

Yet, the jihadist activity has grown. Since 2003, the number of places where jihadistic thought is being proclaimed doubled.

About 45 percent of Spanish jihadists arrested since 2013 have Spanish nationality.