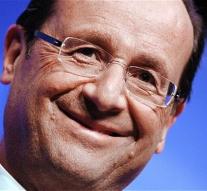 - That the French are famous for the good life, proves President Francois Hollande. The balding Frenchman rents since the beginning of his tenure in 2012, a barber in the messy amount of 9895 euros per month. And the bill? Which may tick off the French taxpayer.

The weekly Le Canard Enchaîné, a magazine that always writes critically about politicians, the contract Hairdresser hands of the French Head of State, Olivier BB has a contract of Hollandes the full five-year presidency, a job that he totaling a whopping 593. produces 700 euros.

For that amount, he must always be ready for Hollande. He accompanies the president on trips that last longer than a day and will also receive various expenses in addition to his exorbitant salary. 'The three strands of hair from the President cut and combs, wash his hair, dyeing and styling, it's quite a job,' notes Le Canard Enchainé subtly.