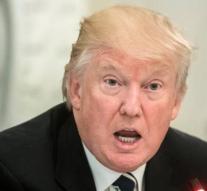 frankfurt - Deutsche Bank refuses to hand over information about President Donald Trump to members of a commission in the US House of Representatives. Attorneys in the institution informed the Democratic politicians in a letter that it was confidential.

The German bank relies on US privacy laws. 'We must keep us in law', write the lawyers. The five Democratic MEPs in the Financial Services Commission had asked for information about potential financial links between Trump and Russia.

The Democrats can not force the bank to transfer the information. Although their committee could theoretically sue the institution, support for Republican members is needed. These are probably not prepared. No Republican in the committee signed the previous request for information.

The opposition has long been suspicious about the links between Trump and Deutsche Bank. He would have borrowed hundreds of millions of dollars from the institution as a businessman. Trump invested that money in real estate projects. Critics fear that his government may be inclined to treat the bank milderly in maladministration.