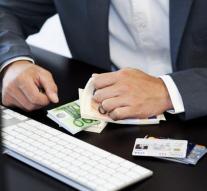 - "Criminals increasingly catching flounder in attempts to plunder bank accounts of Dutch. The damage of fraud via Internet banking is on its way to zero. Cyber ​​Thieves therefore shift their area of ​​operation to include dating websites."

"The loot was stolen in the first half of 2012 with 24.7 million still huge, but was of Dutch bank accounts in the first six months of this year \"only\" 148 000. Since the advent of Internet banking fraud, this figure has never been so low, according to new figures from Payments Association Netherlands and the Dutch Banking Association (NVB)."