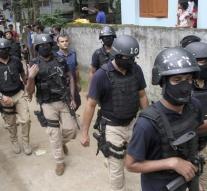 dhaka - The police in Bangladesh on Saturday during raids in different places slain in the midst of the country eleven suspected Islamists: nine in the district of Gazipur and two in Tangail. In searches of two shelters in Gazipur encountered the police on a machine gun, ammunition, explosives and a machete.

Among the dead in Gazipur local commander would be banned from the group Jamaatul Mujahideen Bangladesh. The JMB would include responsibility for the terrorist attack on July 1 at a popular café foreigners in the capital Dhaka, where were slain twenty visitors, and two police officers.

Or even in the raid in Tangail weapons were found is unclear.