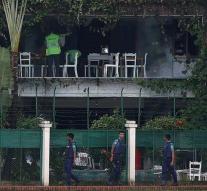 dhaka - has slain four Islamist extremists an anti-terrorism unit of the Bangladeshi police who were hiding in a suburb of the capital Dhaka. Among the killed terrorists Naraynganj was Tamir Ahmad Chowdhury, said the head of the unit Saturday.

Chowdhury, a naturalized Canadian, was seen as the mastermind behind the terrorist attack last month at a cafe in Dhaka where 22 people, mostly foreigners, were slain.