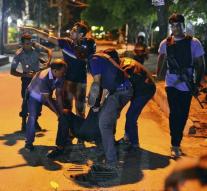 dhaka - A SWAT team in Bangladesh on Thursday arrested four members of the Jamaat-ul-Mujahideen Bangladesh, the banned radical group that was behind the recent terrorist attack on a restaurant in the capital, Dhaka.

The arrests were made during a raid on an apartment on the outskirts of Dhaka. Among those arrested would chair the regional leader of the JMB. One of the other three detainees was a medical student, said a spokesman.

In the flat were ammunition, weapons, evidence uncovered for making bombs and jihadist literature.


During the attack on the restaurant in an upmarket district of Dhaka on July 1 were 22 people killed, mostly foreign hostages from Italy, Japan, India and the United States. The five robbers, most of whom come from wealthy, liberal families were shot. In the past year, liberal bloggers, academics and members of religious minorities murdered by fanatical Islamists in Bangladesh.