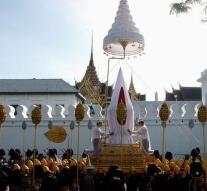 bangkok - Hotels in Bangkok's old town, backpackers home and an enclave for foreign tourists, are as well as being booked on the occasion of King Bhumibol's cremation next week.

The ceremonies surrounding King Bhumibol's cremation will take five days to take place next week. Most of the actions take place in the Grand Palace and in the royal Sanam Luang, a public square in the historical district. The king died on October 13 last year after seven decades on the throne.

Approximately 250,000 robbers are expected to attend the ceremonies, which are held in gold-plated specially designed pavilions. October 26 and 27 have been declared national day off.

'We are fully booked during royal cremation,' said Preechaya Amngeun, hosted by Ibis Styles Bangkok Khaosan Viengtai, part of the French hotel group Accor. 'About 80 percent of the guests we have are Thai. The other 20 percent are foreign tourists. '

The Thai tourism sector accounts for 12 percent of gross domestic product. It is a positive factor in a staggering economy under which the country has fallen since the 2014 coup.