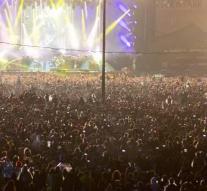 - The terrorist threat that made a premature end to the evening program of 'Rock am Ring' on Fridays did not affect the twin festival 'Rock im Park'. In Nuremberg, the bands performed for about 85,000 music lovers. 'There is no reason for distress,' said a spokesman for the organization.

At both events, the same groups occur, but in a different order. As soon as the site was cleared on the Nürburgring, 'im Park' appeared on the stage the main act 'Die Toten Hosen'. Again, security measures were tightened after the attack in the Manchester Arena at the performance of the American pop diva Ariana Grande.

In Nuremberg around 1300 security officials have been rolling up for the three-day festival. There are one hundred more than in Nürburg in the Eifel. The visitors are thoroughly checked at the entrances. Bags and backpacks may not come in.

Also the organizations of the Pinkpop Dutch festival, which starts Saturday, see no reason for concern or modifications of security.