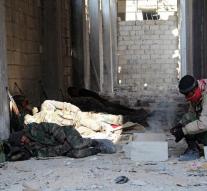 aleppo - Secretary-General Ban Ki-moon of the United Nations is concerned about reports of possible atrocities against the population in the Syrian Aleppo. Unconfirmed reports talk about atrocities against civilians in Aleppo including many women and children.

Ban Ki-moon has instructed his special envoy to talk urgently with stakeholders.

The UN chief voiced his concerns Monday when it became known that Aleppo again almost entirely in the hands of government forces. They make many gains since the air attacks are staged on the rebels.

Aleppo has been since 2012 in the hands of rebels. They are against the government and to the president of Syria, Bashar al-Assad step down. Assad does not think about it and put a lot of violence in October to stop the rebels. By the fighting have fled some 3,000 children.