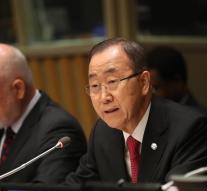 - Ban Ki-moon on Sunday during the General Assembly of the United Nations in line with many displaying his disgust at the continuing attacks on Aleppo from the air.

Fighters from the Syrian army, supported by the Russians, throw over the quarters in hetoosten of the city controlled by rebels include bombs that can destroy bunkers. The UN Secretary General spoke of barbaric practices ' '' ' and war crimes '' and called for de-escalation.

' We should not forget that hospitals and schools throughout the fight only can work in basements. This kind of bomb blows no bunkers but grows on people who are looking for the last refuges to them still remains. The systematic use of heavy destruction weapons in densely populated areas is a war crime. ''