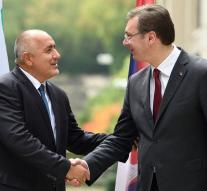 - The Balkan countries Bulgaria, Romania and Serbia threaten to close the borders as Germany and Austria do so. That is what the Bulgarian Prime Minister Boiko Borisov said Saturday. He said the countries would be no "buffer zones" for refugees.

Borisov made ​​the statement following talks with his Serbian counterpart Aleksandar Vucic and the Romanian Prime Minister Victor Ponta. Refugees travel mainly through Balkan countries to reach Western Europe. If the borders of Germany and Austria will be locked, threaten migrants stranded on the Balkans.

In the night from Friday to Saturday more than 1,300 refugees have crossed the border between Croatia and Slovenia came about. President Jean-Claude Juncker of the European Commission said Saturday that he wants to consult quickly with EU leaders on measures to control the flow of refugees in the Balkans.