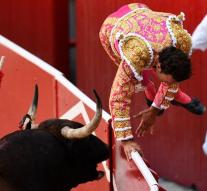 madrid - The Balearic Islands, including Majorca, Menorca and Ibiza, prohibit bullring during bullfighting from Monday. It was after the Canary Islands in 1991 the second Spanish region that has laid down this lawfully. Additionally, the bulls should not be subjected to physical and psychological pain. The duration of a bullfight is limited to 10 minutes.

In a traditional bullfight, bull and bullfighter fight against each other. The battle takes about half an hour, where the bullfighter tries to kill the animal by stabbing a sword through his heart. Now, bulls in the Balearic Islands get a medical check and go back to the farm after the duel.

Bullfighting, 'la fiesta nacional' as it is known in Spain, is deeply rooted in Spanish tradition. Nevertheless, a growing number of animal rights activists continue to protest and demand a complete ban.