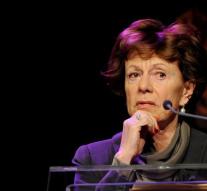 brussels - The 'Bahama affair' by former Commissioner Neelie Kroes has been referred to the ethics committee of the European Commission. That confirmed a spokesman for the committee Wednesday in Brussels.

President Jean-Claude Juncker switches the internal advisory about integrity issues because Kroes her directorship in a company in the Bahamas with her re-appointment as Commissioner suppressed in 2009. He had asked her written explanation and got, but is now in the issue one step further. The watchdog judges or former commissioners abide by the codes of conduct.

The committee has already started an investigation into possible conflicts of interest of its then boss, Junckers predecessor José Barroso. The Portuguese has recently started working at investment bank Goldman Sachs, but already seems to have maintained close ties with the bank during his high position in Brussels.

For legal reasons ' 'Brussels would not comment on the explanations given Kroes Juncker about the affair. But she has itself previously said that it is a clerical error in the Bahamas. She has also been recognized to have violated the code of conduct for former commissioners and to accept the consequences.

The European Parliament wants to tighten the code of conduct and the 75-year-old Kroes its paces on the issue last month via the BahamaLeaks' came out. The parliament had both her appointment in 2004 as Commissioner for Competition and in 2009 as Commissioner for the Digital Agenda, expressed concern about its links with industry.