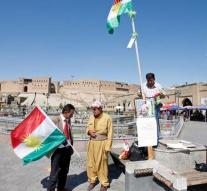 baghdad - The Iraqi authorities want to get hold of telecommunications companies in the Kurdish area. They must move their headquarters to Baghdad capital.

'The government national safety committee has made a decision: all mobile networks must be placed under federal control,' the government reported.

The government did not name the companies in question, but it is probably Korek and Asiacell. These companies are located in the cities of Erbil and Sulaimaniya, in the Kurdish region. The headquarters of the third provider of Iraq, Zain, is already in Baghdad.

The government did not say what measures businesses could see if they did not cooperate. The central government in Baghdad and the authorities in the autonomous Kurdish areas have been on a ramp since the Kurds chose a referendum for independence.