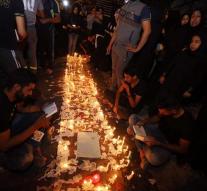 baghdad - The death toll has risen to at least 250, made the Iraqi Ministry of Health Tuesday known as a result of the bomb attack in a busy shopping district in Baghdad. More than three hundred people were injured.

A suicide bomber left in the night from Saturday to Sunday detonate truck loaded with explosives in the predominantly Shiite district of Karrada. Since many families with children were on the leg to shop for the end of Ramadan.

The extremist Sunni group Islamic State claimed responsibility. The group, underlining its ability to continue to carry out attacks, despite losing its stronghold Fallujah, which last month was captured by Iraqi government forces.

On the square were many families with children present when the bomb exploded.

The attack was one of the bloodiest in Iraqi capital in more than a decade of war and insurgency in Iraq. Prime Minister Haider al-Abadi announced three days of national mourning and ordered new security measures. He wore checking the Interior Ministry vehicles stringent.