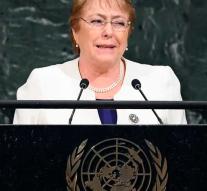 geneva - Chilean former president Michelle Bachelet is the new High Commissioner for Human Rights of the United Nations. The UN General Assembly voted unanimously on Friday with her appointment.

UN Secretary-General António Guterres had nominated Bachelet. From September 1 she is the successor of the Jordanian Zeid Ra'ad Al Hussein for four years.

Bachelet was president of Chile from 2006 to 2010 and from 2014 to 2018. She also filled various ministerial posts in the South American country. She was in the Departments of Defense and Health.

After her appointment, Bachelet said that she would exercise the function of UN Human Rights Chief with 'full conviction and all her energy'.