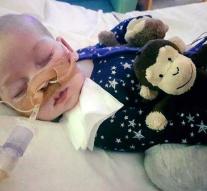 london - The British baby Charlie Gard died in the hospice where he was from yesterday. That's what the British newspaper reports Daily Mail.

The parents of Charlie have in vain a legal battle to have their child undergo an experimental treatment in the United States. Last Monday they gave up that battle. Chris Gard and Connie Yates wanted to take Charlie home to let him die there, but according to their lawyer, the hospital threw up obstacles.