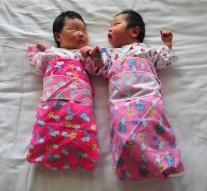 - Hospitals in China are eagerly to the influx of future mothers. It is then worse. The next five years, 15 million babies expected by the new 'two-child policy. Cities are experiencing a shortage of beds, midwives and nannies.

In January the two-child policy started to stand against aging. It is expected that each year three million more babies are born. According to international media rush Chinese women are making a baby. '

In a local children's hospital some three hundred new patients were already adopted. Women who are pregnant must also make three to four months in advance an appointment. The day of the appointment are also waiting longer than usual.