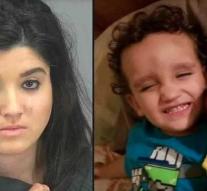 phoenix - Two young children aged 9 months and 2 years were killed in the US state of Arizona by overheating. They were left in the car when their mother went to work. The 20-year-old woman was arrested shortly after the discovery of the bodies.

She has always denied that she left the little ones in March this year. Because for a long time it was not certain exactly where the children had died, an autopsy was recently performed. Possible causes of death such as drugs or illness could be excluded in this way.

It was 23 degrees that day and the sun was shining, which caused the temperature to rise quickly in the car. Every year, an average of 37 children die in the United States in sweltering cars.

Despite warnings, there are still people in the Netherlands who leave their children or pets in the car. In the Utrecht village of Haarzuilens, three young children aged one, three and five years old were taken from a sweltering car at the end of June. The parents had left their children in the vehicle according to the police to 'just' go to the flea market.