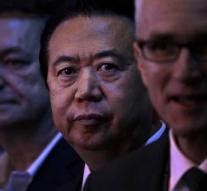 lyon - Where is Hongwei Meng, the CEO of Interpol? He has been missing since the end of September. That made the wife of the first and only Chinese chairman known in the history of the international police organization. Meng lives with her in Lyon, where the Interpol headquarters is located and, at the time of his missing, visited his homeland.

Meng was born in Harbin and graduated from Law at Peking University. He is vice minister of public security in China within the communist party. Since his appointment there in 2004, he became head of the Chinese branch of Interpol. Besides head of the Chinese Coast Guard, he was deputy director of the Chinese State Oceanic Administration, where he became responsible for the coastal area. In addition, he fought on behalf of the regime against terrorism and drugs within committees.

In 2016, Meng was unanimously elected president during a meeting in Indonesia. That China would deliver a head also seemed a matter of time, because the country accounts for one fifth of the world's population. The election led to a lot of international criticism. Amnesty International pointed to his past in the Chinese Communist Party. James Lewis of the Center of Strategic and International Studies, an American think tank, feared that the president would abuse his power to put political opponents abroad on the blacklist of Interpol. Earlier, China was already taking steps against Ugandan activists and dissidents in Thailand. Other Interpol member countries might be less critical of this with a Chinese in power.